Adapt is the second episode of the first series of Bertram: Old Warrior.

Upon arriving at the Alun Railway, Bertram immediately starts planning his escape. After being goaded back by the mysterious Proteus, it isn't long before the duo find themselves in grave danger.

Bertram arrives at the Alun Railway and Caderyn Gerralt declares he is now home. He sends Bertram to find Proteus who will show him around.

Bertram finds Proteus in the yards with a strange looking engine, Mighty Mac, who leave bickering with one another. Proteus introduces himself and asks why he looks so sad. Bertram explains the day's events and Proteus sympathises with him. Proteus tells him about the railway and the engines who run it. He then suggests Bertram get a good night's sleep.

That night, Bertram leaves the sheds with the intention of returning home to the Cynwrig Railway but is followed by Proteus. At the junction, Proteus tries to reason with a broken Bertram and eventually persuades him to stay.

The next morning, Bertram is woken by a moody Caderyn who demands he get to work. Bertram helps load trucks at the loading bay, whilst Proteus collects trucks to go to the mine. A foreman suddenly informs Bertram of the damaged Aberfa Bridge that leads to the mine. Bertram rushes to warn Proteus but when he arrives at the Shunting Yards, Proteus has already left for the Mine. Mighty Mac tells him the directions but are confused by his erratic behaviour.

Proteus crashes through a danger sign and onto the unstable bridge. Bertram arrives in time and comes up with a plan to pull Proteus and his train of trucks to safety. However, the coupling breaks, leaving Proteus stranded in the middle of the bridge. Bertram bravely makes his way onto the bridge and pulls him to safety just as the bridge collapses.

Back at the sheds, Caderyn apologises for Bertram and Proteus' ordeal and states he that was right to buy Bertram after all. A grateful Proteus praises Bertram who agrees that the railway isn't that bad after all.

Add a photo to this gallery 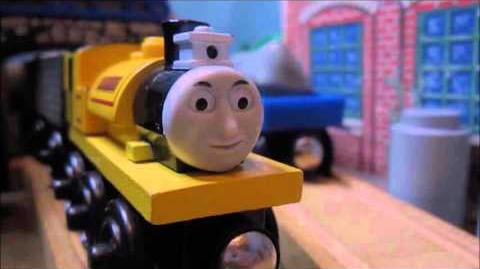 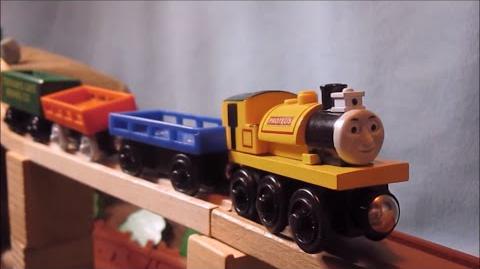