Genesis is the first episode of the first series of the show, Bertram: Old Warrior.

On the Cynwrig Railway, an old village line deep in Wales, Bertram lives a happy and safe life. But the young tank engine's world is about to be rocked to the core when tragedy strikes.

Bertram's brother, Duke, sets off for his new life despite Bertram's pleas for him to stay. Gareth Heilwyn informs Bertram that Duke has gone to work on an island but, due not being able give him a tender, Bertram cannot follow. Despite wanting to join his brother, Bertram has to go to the Cynwrig Railway.

Bertram returns to the sheds but is immediately scolded by his controller, Ellis Garth. He is informed by Huxley Billingsworth that Gwydion is has not cleared his signal box. Despite being ordered to collect the livestock, Bertram sets off to find Gwydion. When he reaches the signal box, he soon hears Gwydion's runaway train approaching. A chase ensues and Bertram rushes back to the sheds where he has a plan. He creates a blockade to stop the trucks and save the livestock. The plan works though Garth is not happy with the mess. Gwydion arrives and jokes his trucks just disappeared.

Later, the two engines discuss life and Bertram reveals he steal feels pain from his brother abandoning him. Gwydion advises him to move on and put the past behind him. Bertram agrees and they go to sleep.

The next morning, the pair are informed by a grief-stricken Huxley that their controller has died of a pulmonary embolism. Bertram struggles to take the news and reacts badly. He later apologises for his outburst but is approached by Caderyn Gerralt, controller of the Alun Railway, who wants to buy him. Bertram begs Caderyn to buy Gwydion too but he refuses. A devastated Bertram says his goodbyes, promising to return for Gwydion one day, and leaves for the Alun Railway.

Add a photo to this gallery 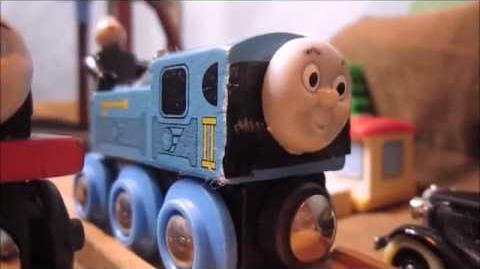