Mighty Mac is a powerful but inexperienced double-ended Fairlie duplex locomotive working on the Alun Railway. Mighty, the more gruff of the pair, sports a flick of hair over his forehead, while Mac, the younger, sports freckles.

Mighty Mac currently works in the shunting yards, preparing trains and moving trucks and also serves as a lackey to Arwel. In 1905, he met Bertram whom he later assisted Arwel in frightening at the ballast chute.

Mighty Mac is a powerful but inexperienced engine, easily influenced by those of a more dominant manner, as seen in their loyalty to Arwel. While the pair argue a lot, they are strong when they work together. 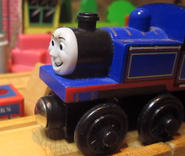 Add a photo to this gallery
Retrieved from "https://bertramoldwarrior.fandom.com/wiki/Mighty_Mac?oldid=517"
Community content is available under CC-BY-SA unless otherwise noted.